Is a misunderstanding regarding a poker table and poker visor with uniform allegedly worn by Lieutenant Commander Data of the Starship Enterprise worth $7 million in damages? Apparently lifelong Trekkie, Ted Moustakis, believed it was after being denied in case his against Christie’s auction house by the New York State Appellate Court for fraud and negligent misrepresenation. 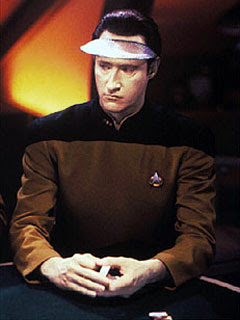 At a Christie’s auction, Moustakis won bids for approximately $25,000 for items that allegedly appeared on Star Trek, The Next Generation – a poker table and Star Trek uniform and poker visor allegedly worn by actor Brent Spiner, who plays the character “Data” on the show. (Also sold were a six and a half foot model of the Starship Enterprise for over a half million dollars and another uniform and pants allegedly worn by Spiner/Data sold for almost $10,000.) Moustakis claims that after having a conversation with Spiner at a convention, he discovered that the items were never actually worn on the show. Further investigations lead Moustakis to believe the items were fake, although it is unknown to me what led him to that conclusion.

The bottom line? The judge ruled that Christie’s warranties and limitations of liability insulated the auction house. I’m not sure I was altogether satisfied with the explanation although there are many facts here that we don’t know about this sensational case. It is alleged (and which may have been introduced into evidence) that Christie’s had posted incorrect information that was revised in a handout provide to live bidders – in addition to a correction made before the auction. Despite  this disclaimer, the plaintiff apparently claimed that Christie’s had knowledge of numerous duplicate items that Paramount (studio creating Star Trek) was warehousing and which never appeared on the show. Moustakis apparently discovered several identical items available on eBay for less than half the price he paid, as well as differentiation the poker table on the show from the one he had bought.

Certainly I can understand the disappointment of the bidder but several million dollars worth of damages?

This opinion is uncorrected and subject to revision before publication in the Official Reports.

Order, Supreme Court, New York County (Joan A. Madden, J.), entered October 7, 2008, which granted defendants’ motion to dismiss the complaint to the extent of dismissing all causes of action related to one of the items purchased by plaintiff, as well as the claims for fraud, negligent misrepresentation and violation of the General Business Law relating to all items, and the demands for punitive damages, unanimously affirmed, without costs.

This action arises out of an auction of memorabilia from the Star Trek television series and motion pictures. Contrary to plaintiff’s contention that defendant Christie’s had represented the Commander Data uniform to be one of a kind, no such representation was ever made in the auction catalogue. Significantly, the Conditions of Sale, which plaintiff accepted in order to be allowed to participate in the bidding process, expressly declared that “all property is sold as is’ without any representation or warranty of any kind by Christie’s or the seller.” UCC 2-316(3)(a) recognizes that “unless the circumstances indicate otherwise, all implied warranties are excluded by expressions like as is’ . . . which in common understanding calls the buyer’s attention to the exclusion of warranties and makes plain that there is no implied warranty.”

Even assuming there was a breach of contract or warranty as to the other two items purchased by plaintiff at the auction, he was, under the Conditions of Sale, contractually precluded from pursuing the massive recovery he now demands. The only remedy available to him thereunder would be a refund of the sale price(s) upon return of the item(s), a limitation generally permissible in contracts for the sale of goods (see UCC 2-719[1][a]).

The allegations of fraud and negligent misrepresentation are virtually identical to those upon which the causes of action for breach of contract and breach of warranty rest, and are thus duplicative, inasmuch as there is no pleading of the breach of a duty separate and apart from the contractual obligation owed to plaintiff. In that regard, it is axiomatic that “a simple breach of contract is not to be considered a tort unless a legal duty independent of the contract itself has been violated” (Clark-Fitzpatrick, Inc. v Long Is. R.R. Co., 70 NY2d 382, 389 [1987]).

Nor does plaintiff have a viable cause of action against these defendants under General Business Law § 349 or § 350. A party seeking those remedies must charge conduct that is consumer oriented, with an impact on the public at large (Canario v Gunn, 300 AD2d 332 [*2][2002]). Finally, the misconduct alleged here, which arises from a private contract, does not resemble the egregious wrongdoing that could be considered part of a pattern directed at the public generally, so as to warrant the imposition of punitive damages (see Garrity v Lyle Stuart, Inc., 40 NY2d 354, 358 [1976]).

THIS CONSTITUTES THE DECISION AND ORDER

Michael M. Wechsler, Esq. – who has written 35 posts on The Law Professor.

About The Law Professor

Michael M. Wechsler, Esq. is an experienced technology attorney and early Internet entrepreneur. He founded Apple online community EastNet in 1992 (featured by David Pogue in Macworld Magazine) and subsequently TheLaw.com, one of the earliest online legal websites. For several years he served as legal counsel to iVillage, was as an e-discovery legal consultant for Kroll Ontrack, was recently SVP of Business Strategy at Zedge, and is currently at the helm of The Law Network. More about The Law Professor.
FacebookGoogleLInked InTwitter